A couple of weeks ago, a private message popped up on Imperial’s Facebook account. A woman in Ohio was inquiring about an old metal box she had found in the trunk of her car. She sent a picture of her son holding the box. Glued to the inside of the lid, a worn label outlined instructions on how to administer first aid in an emergency. Under the instructions read “Sleeper & Company” and an address on Main St. in Worcester, MA.

Imperial Distributors came up in the Facebook inquirer’s internet search of the inscribed company name and address. So, she reached out to ask if we knew anything about the box and how old it is. We do. And it is about 85 years old.

The metal box is the famous (to the Imperial family) first aid kit that my grandfather, Frank Sleeper, sold door-to-door to local businesses in Worcester in the mid-1930’s. It was the first aid kit that inspired Frank’s idea to sell a broader assortment of non-food products to grocery stores. He later transformed that vision into Imperial Distributors in 1939.

I remember my grandfather telling the story about how he assembled the first aid kits and loaded them into his car to sell through the inventory each week. The goal, he said, was to make enough money to marry my grandmother. My dad recounts how he sourced the metal boxes for the kits, first from a retailer in Worcester and then directly from the manufacturer in Connecticut. My sister recalls his depiction of affixing the labels onto each box. None of us had ever seen one of his first aid kits in person.

This specific first aid kit owned by the family in Ohio, we are told, made its way from Worcester to Maryland and then Ohio. It was being used as a toolbox when they discovered it in their car. We offered to buy it from them.

After 85 years, Frank Sleeper’s original first aid kit has returned home to Imperial in Worcester. For the Sleeper family, it is an heirloom and a fond memory of my grandfather. For the Imperial family, it is a valuable artifact, symbolizing the history of our company, and an inspiring reminder of the entrepreneurialism, persistence and creativity that continue to drive us to this day. 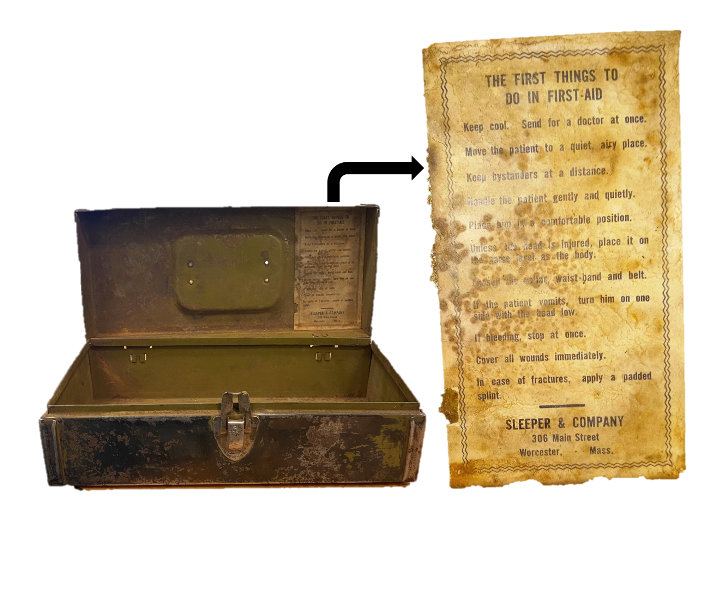